Commercial, Delivery, Work, Utility and Emergency Vehicles and trucks make up a large percentage of traffic on highways around the world.  These vehicles are normally larger than the standard passenger car.  In the event of a collision the smaller vehicle normally incurs the greatest damage and injury.  Commercial drivers are trained to watch out for smaller vehicles and most have CDL or commercial drivers licenses.  Passenger vehicle drivers generally hold only a standard drivers license and are not commercially trained.  Because of this, commercial vehicles and drivers are subject to a higher level of responsibility and liability in traffic.  Commercial vehicles are generally owned by larger companies who again are subject to higher levels of responsibility when it comes to safety.

Commercial Vehicles that make frequent stops in traffic are at high risk for rear end collisions.  The cost of an accident to a commercial business or government entity can be substantial sometimes reaching into the tens of thousands of dollars or more in cases of personal injury.  By clearly marking the rear of these vehicles with high visibility reflective tape, accidents can be reduced substantially.

In Europe, standards have already been increased in an effort to reduce rear end collisions.  The following is an example of that regulation.

Any works vehicles that are used to protect the workforce should be of conspicuous colour and carry appropriate marking.
On high-speed roads, all vehicles stopping on the highway for works purposes should carry high visibility rear markings, including chevrons comprising alternate strips of fluorescent orange-red retroreflective material and fluorescent yellow non-retroreflective material.
The markings should cover as much of the rear-facing portion of the vehicle as possible without obscuring windows, vehicle lighting or registration plates.
Red retroreflective tape should also be applied to all rear facing edges of open doors, guardrails and equipment lockers.

By increasing the visibility of commercial vehicles, approaching drivers have a much better chance of seeing the vehicle and determining whether it is moving with traffic or stopped.  If it is stopped, they can take the necessary precautions to avoid a collision. 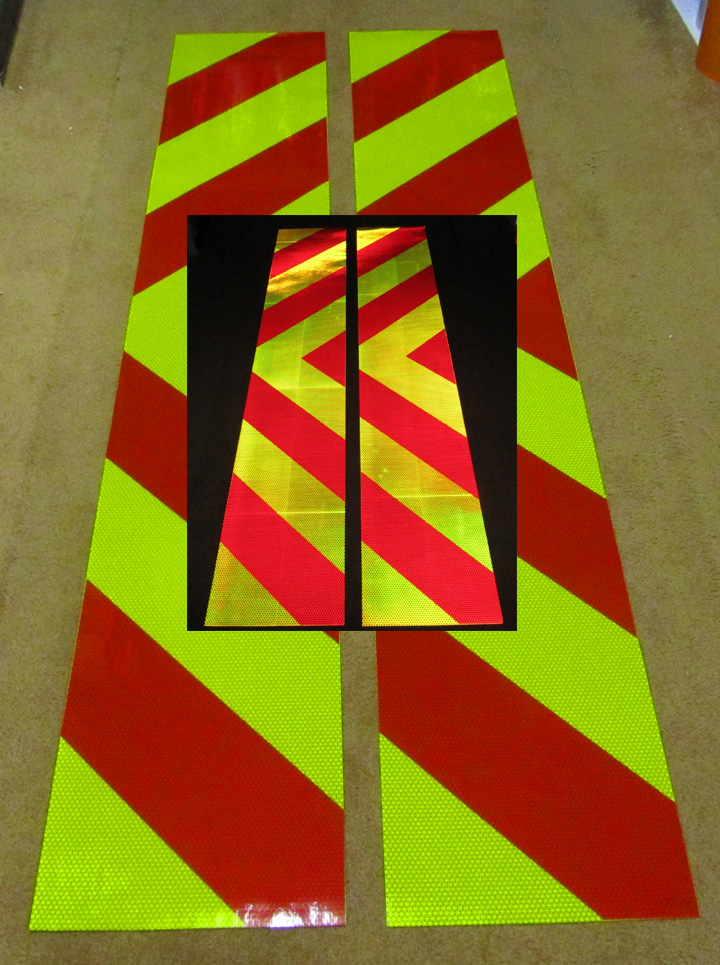 Chevron Striping is the preferred method of marking commercial vehicles.  This pattern is consistent with the pattern used in work zones to get the attention of drivers.  The downward slanting stripes that alternate in color have been shown in tests to grab the attention of approaching drivers more than standard markings such as alternating dot tape.  Bright colors and high contrast are necessary to get an approaching drivers attention.  The most popular combination is fluorescent lime yellow and red followed by fluorescent lime yellow and orange.  Studies in the US, Canada and Europe have shown that fluorescent colors such as fluorescent lime and fluorescent orange are much more visible and recognizable in the daytime.  This is because fluorescent colors reflect ultraviolet light back in a way that standard colors do not.  They are also bright and easily seen at night.  School zones and work zones use these colors for this very reason.  Quick recognition is crucial when entering these areas.

We have a variety of chevron panels and alternating color panels available at www.chevronpanels.com .   We carry fluorescent lime which we normally use for the background.  We also carry white for background.  For the offsetting color we use red and orange.  Red is the most popular color on the lime with orange being second.

We also have rolls of reflective chevron material that can be used to create chevron designs on vehicles.  This is a less expensive and very effective alternative to the premade panels.  The pictures below show the colors that we have for the rolls. 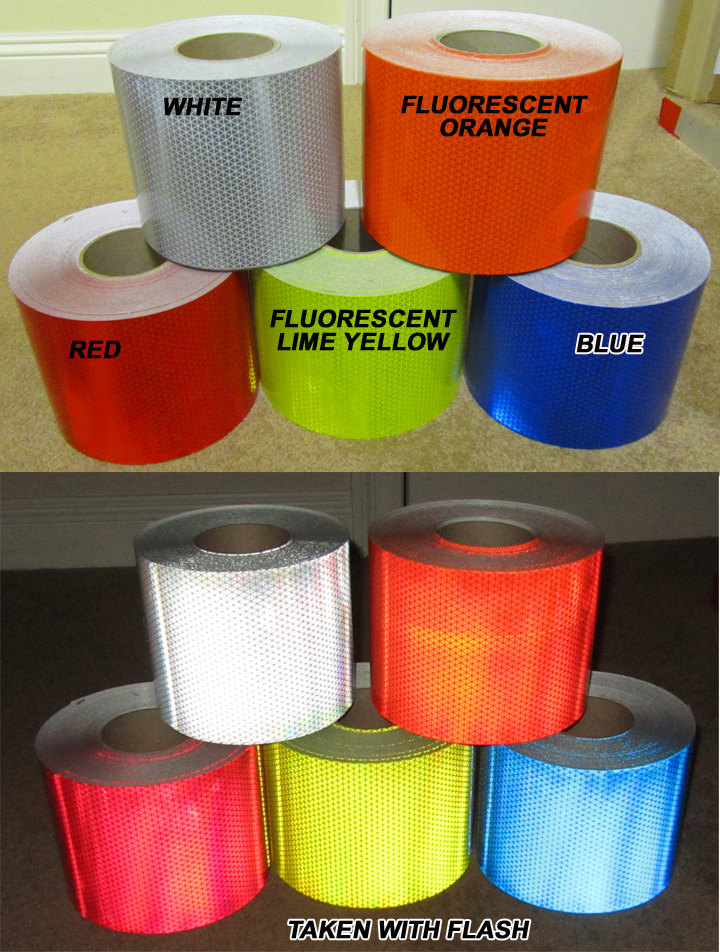 For Barricades and More

Sponsored by Reflective Inc. Distributors of Quality Reflective Tapes since 1998. For information on our products "CLICK HERE"